It is now official! - Rabbi Eliezer Berland shlit"a has "dissapeared". 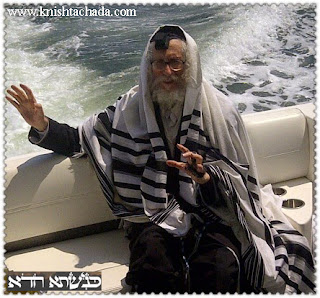 Until 6:00pm in the Netherlands the Dutch authorities were waiting for Rabbi Berland to show up at his weekly appointment in Amsterdam police station. But now that the Rabbi has not shown up he is officially announced missing, it is hard for them to believe that he was able to leave Europe without a passport but if he indeed succeeded, his attorney Louis De Leon believes that it is a clear sign of a great Holy person with supernatural powers. All the Dutch authorities can do now is continue waiting to see if the Tzadik shows up.

There was a similar story like this with Rashi (1040-1105):
There was once a General who tried to conquer many countries. When he desired to conquer Jerusalem from the Ishmaelites, he wanted to consult with Rashi. He sent a message to Rashi who lived in France but Rashi did not respond because he knew that General was a cruel and did evil deeds. The General was furious and came to France to Rashi. When he arrived, Rashi disappeared in the study hall, and became invisible. The man realized that he was dealing with a holy man, and so he promised not to harm him. Rashi then came before him and bowed. The latter asked if he would succeed in war with the Ishmaelites because he had thousands of cavalry and 200 ships and 7,000 high cavalries. Rashi thought a moment, and said that he would conquer Jerusalem for three days and on the fourth day they will chase him out, and he will return home with only 3 cavalries (him and another two). The General was insulted by this response, and answered "If anything he said is wrong, even if I return with 4 and not 3 cavalries, I will give the flesh of Rashi to the dogs, and send to exile all of French Jewry". Everything that Rashi promised happened, but when he returned to his city he was with 4 cavalries and he therefore wanted to hurt Rashi. But when he entered the city a rock fell from the wall of the gates of the city, killing one cavalry with his horse. He then understood the greatness of Rashi came and kissed his hands. (source: Shem Hagedolim)