For a long time people have been praying fervently for the healing and success of HaGaon HaRav Eliezer Berland, Shlita.  Particularly in this past era, people have convened in prayer rallies and sacred gatherings to awaken and arouse Divine Mercy through tears and pleas.  The holy attachment that exists between our leader HaGaon Hatsadik HaRav Eliezer Berland with the leaders of Israel and their love for him is well known.  Currently, HaRav Aharon Boymil the famed community activist and gabai of gedolei hador opens up with news and updates in response to the concerns from the Gedolim of Israel about our leader HaGaon HatsadikRav Eliezer Berland, Shlita.  Things we thought in our hearts are now unfolding before us in all its glory.
“Don’t think that only Anshei Shlomeinu in Breslov are praying for Rav Eliezer Berland, Shlita.  All of the bigAdmorim, Rabonim, and Tsadikim from the whole world are praying for the Rav, Shlita!  From Rav Shteinman to the Belz Admor, to the Gur Rebbe until Rav Kanievsky, everyone is praying for Rav Berland, Shlita, and are always interested in what is happening with him.  The gabbai of Rebbe David Abuchatzera, Shlita, called me personally last week and told me that the Rebbe wanted to know what’s happening with Rav Eliezer Berland,Shlita.  The house of Rav Shteinman called and wants to know what’s happening with HaRav.  The son of the Belz Rebbe himself called me to find out what’s going on with the Rav and said that his father wants to know.  It’s not that Rav Eliezer Berland, Shlita, is alone in the world and only his chassidim are the ones that care about him.  All the Gedolim of Israel from the whole world care about the Rav and are praying for him.
A minyan of us chassidim from Anshei Shlomeinu went to the gravesite of Rebbe Yossi HaGalili in order to read the letter by Rebbe Shimshon of Ostropoli for the success of the Rav, Shlita.  On the way home, we stopped in Tiberias by the Rav Hatsadik Dov Kook, Shlita, but it was very hard to reach him because of all the students surrounding him.  I banged on the booth pulpit and said, “HaRav Kook, HaRav Kook, HaRav Eliezer Berland is in exile and is suffering so much.  If you had been in this situation like the Rav, Rav Berland, Shlita, would turn the world upside down for you.  Why don’t you overturn the world for him?  The whole synagogue stood silent, only three members came up to me and told me- leave here immediately.  But HaRav Kook came up to me, hugged me, and told me... 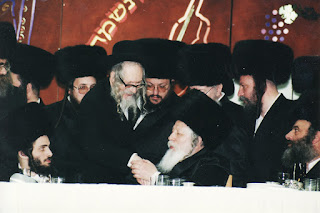