Abridged version in HD Uncut version
Posted by כ ח at 12:00 AM No comments: 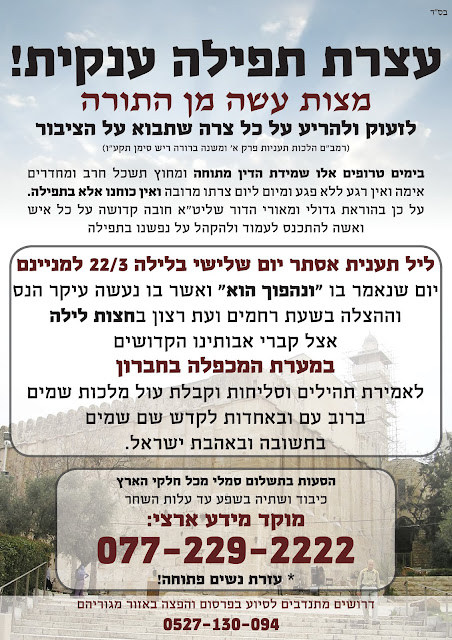 HUGE PRAYER RALLY!
Tuesday night Taanis Esther March 22
At Ma’aras Hamachpeila in Chevron
Starting at midnight and lasting till the morning
Refreshments will be served
Women section will be open
Subsidized buses from all across the country
Tens of thousands are expected
Find out about buses in your area

The correct mindset going into Purim by Rabbi Eliezer Berland


On Purim we must make a great effort to ‘keep our wits together’ more than on Yom HaKippurim, because on Yom HaKippurim we sit in shul 24 hours, glued to our chairs but on Purim we have to drink wine, be happy, sing and dance while maintaining Yishuv hadaas (peace of mind) and clinging to Hashem.

"Remember what Amalek did to you”

Prayer
Please, compassionate and merciful G-d, help us to merit through the joy, the meal and the drinking of Purim, to reach the mochin of Arich which is drawn from the 50th gate, from the “Reisha d’lo Isyada, ” (the Head that is Unknown), until we merit to achieve the Upper Will, to know nothing at all, which is the aspect of “mah.” And we should be included in the upper surrounding lights of “What did you see, what did you understand?” (Zohar I:Ib, see Likutei Moharan II, 7:6) until we don’t know the difference between “Cursed is Haman” and “Blessed is Mordechai” Through the power of the light of “Blessed is Mordechai” may we be worthy of repairing the sin of Shaul who was supposed to illuminate all the sparks from the depths of the klippot, and specifically the klippa of Haman-Amalek.”


(taken with permission from Tzama'a Nafshi)
Posted by כ ח at 12:24 PM No comments: