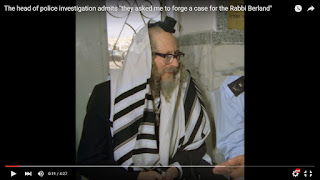 Published on Jan 14, 2016
Rabbi Chaim Barzilai the assistant of Rabbi Shalom Arush and former assistant of Rabbi Ovadia Yosef reveals in an interview what the head of police investigation admitted to Rabbi Arush about the case of Rabbi Eliezer Berland.

“My superiors threatened me that if I don’t forge a false case on Rabbi Berland I will lose my position”.

“From the moment I began trying to create a case against the Rabbi, I am suffering, I had a major car accident, got divorced etc.”

Rabbi Barzilai says that this police officer who was a completely irreligious man recently began doing teshuva and becoming religious, he feels terrible about his deeds. So he sat with Rabbi Arush and was crying bitter tears, “how do I fix what I did?”

So Rabbi Arush told him that the only way to fix what he did is to admit his deeds in public. However, in doing so he will lose his job and get arrested, libels, forging false cases, is a serious crime.

“Look at all the heads of police who were involved in the case, all of them fell into the very same things that they tried saying about the Rabbi. One after the other, around 10 of them already were forced to leave their jobs due to sexual harassment. These are people of Sodom and Gomorrah!”
Posted by כ ח at 6:35 PM